LAX Leading The Nation In ‘Automated’ Lanes Made To Speed Bag Screening! 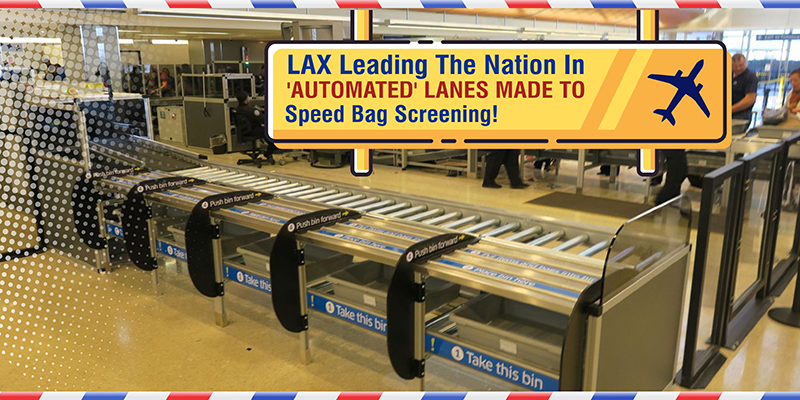 The second-busiest airport Los Angeles International Airport is now the nation’s No. 1 in the number of new “automated” lanes designed to speed security screenings.

Last week LAX added 14 lanes that use multiple conveyor belts which enables five passengers to simultaneously for unloading bags, clothes and shoes into bins for screening. According to airline officials, the lanes can make screenings up to 30% faster.

The 14 lanes also being called as Innovation Lanes were added at the Tom Bradley International Terminal which is in addition to 13 previously installed lanes in Terminals 2, 3 and 7. The planning is to add three more automated lanes in Terminal 3 later this year as per the airport officials.

Airline representatives from the Transportation Security Administration have supported the lanes having five separate stations where passengers can empty their carry-on bags and belongings before the items go through an X-ray scanner. The Two conveyor belts, one that brings empty bins to the travelers and the other that takes full bins to the scanner keep the line going and active, even if any of the stations are occupied by a slow-moving passenger.

The chief information officer for Los Angeles World Airports Aura Moore said: “For the LAX guest, this is a great example of how technology will help speed their journey through the airport while also improving safety and security”.

L3 MacDonald Humfrey Automation was the creator of the lanes at LAX, which is based out of United Kingdom.