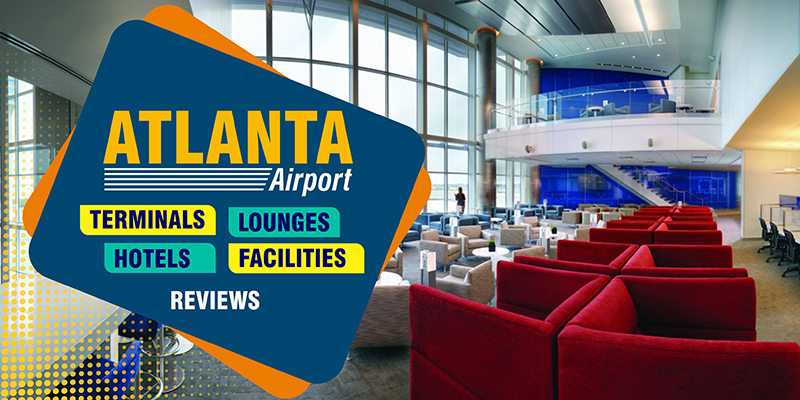 The Atlanta airport is an international airport which is situated in Georgia. And it held its ranking as the world’s busiest airport, by accommodating 100 million passengers and 950,119 flights. The airport has 209 domestic and international gates.

It is located 7 miles (11 km) south of Atlanta’s central business district, in the U.S. state of Georgia.

It is the primary hub of Delta and is a focus city for low-cost carriers Frontier, Southwest, and Spirit. The airport also provides its services to within North America and to countries in South America, Central America, Europe, Asia, and Africa. Hartsfield–Jackson ranks sixth as an international gateway to the USA.

The Airport has 2 terminals (Domestic & International) and each terminal is facilitated with the ticketing, baggage reclaims area, and check-in services. In addition, there are 6 concourses with all the flight gates and the majority of the concessions and amenities.

Both terminals and concourses connect to each other via the underground Transportation Mall.

The Domestic Terminal is divided into two parts:

The International Terminal has three levels. The Departure Level connects directly with the Hourly Parking Deck as well as the Arrivals Level.

There are a number of waiting areas available at the airport and provide the best services to the passengers. There is two entering procedure: one is by paying at the door and the second one is by purchasing a lounge pass or through a lounge membership program.

With available details, you can easily find the lounge itself and can gain lounge access with just an economy class ticket.

There is a number of hotels placed at and nearby of the airport where you can rest and sleep in affordable price with free airport shuttles. The nearby hotels are within just 5-10 minutes from the airport.

There are a number of ways to get to and from Hartsfield-Jackson Atlanta International Airport. Transportation is located just 10 miles south of downtown Atlanta. The passengers can access it via local Metropolitan Atlanta Rapid Transit Authority (MARTA) trains and buses, downtown and suburban shuttles, and interstate highways.

If you want to reach the metro-Atlanta area from Hartsfield Airport, then the Metropolitan Atlanta Rapid Transit Authority (MARTA) is the most efficient method. The trains take just 15 minutes to reach the center of the city. And arrive and depart from the western end of the terminal complex every 8 minutes.

Atlanta Airport Shuttle operates a service to downtown Atlanta every 15 minutes. Northside Airport Express serves northern Atlanta. The passenger can access the services at the ground transportation areas in the North and South terminals.

Passengers can travel between the Domestic Terminal and the Rental Car Center via ATL SkyTrain.

A separate facility that is located at the airport is rental car pickups and drops. The Rental Car Center is a just few minutes far from the terminals. The passenger can access them via ATL SkyTrain, and also via service road for those traveling to the location by vehicle.

ATMs / Cash Machines: There is a number of cash machines available throughout the landside and airside areas of the airport.

Airport Art Program: The airport provides the rotating exhibits of paintings, photographs, and sculptures in addition to the permanent art on display. Musicians perform concerts in the Atrium For its music series.

Baby Care: The airport has opened nursing rooms for mothers to breastfeed in private. On each concourse, there are private pods are available.

Chapel: There is an interfaith chapel located in the Atrium that is on the 3rd Floor, E Center. It opens for 24 hours a day.

Showers: Showers are available at the lounges of the terminal and in the Club at ATL.

This information will assist you with the number of services that are available at the airport during your layover. And will aware you about the airport’s lounges, hotels, and transportation services.

I have to say that for an airport as huge as ATL it is extremely easy to navigate and change planes in a very short time period. I was also incredibly impressed with our arrival process through immigration and customs. There were hundreds of travelers arriving at the same time and we were all processed very quickly in no more than about 20 minutes through immigration and customs and then another 15 minutes or so through security. Staff was all pleasant and welcoming. The whole process was a breeze. Very good free Wi-Fi as well.

Probably the best arrival and departure experience I’ve ever had, thanks to the polite, friendly, and efficient staff of Atlanta’s Hartsfield-Jackson Airport. The airport’s facilities are many, and travel between the various concourses is made easy via good signage, and a rapid-transit train.

Years ago Atlanta had a dubious reputation. Today I have no hesitation in using the USA’s biggest and busiest airport. Arriving early evening from the UK the immigration lines were short and the process pleasant thanks to the personable, yet thorough, the attitude of the immigration officer. Bags were quickly on the belt and having handed in our customs form we followed directions to the transit drop off where our bags were efficiently checked and sent on their way. No hassle, no unpleasantness. Finding our way to another terminal for our onward flight to Denver was a breeze.