India to Resume International Travel: 3200 Flight Operations to Be Carried Out in a Week 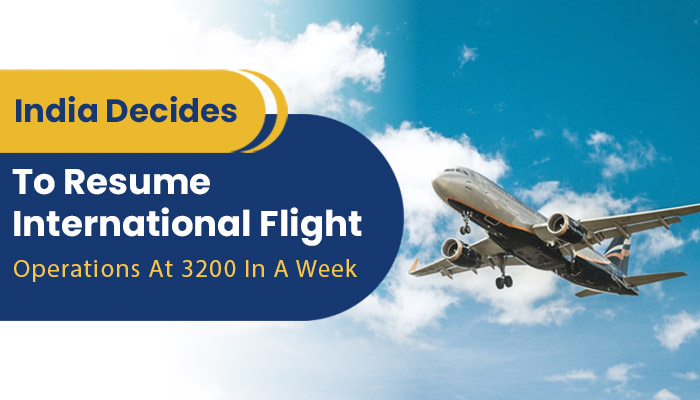 New Delhi: The central government has set up the summer schedule that commences on March 27, 2022, for International commercial flights. India will allow operations of 3200 international flights per week. Directorate General of Civil Aviation (DGCA), in a communiqué has mentioned about the 1466 departures for Indian carriers in a week. Meanwhile, 1783 departures will be carried out by the foreign airline carriers. The Summer Schedule of 2022 commenced from March, 27, 2022 to October 29, 2022.

DGCA has also said that a total of 1466 departures for 27 countries have been approved that will cater to 43 international destinations.

60 International carriers have got the approval of operating 1783 departures to and from India during the “Summer Schedule 2022.”

Other Airlines That Also Got The Approval Are:

The Government of India has allowed these operations to and from India of airlines like American Airlines, Qantas, Air Arabia Abu Dhabi and Salam Air. Of late, the Indian government resumed the International passenger services from 27th of March.

After taking cognizance of the global data of vaccinations around the world and consulting with the major stakeholders, the government finally took this decision to resume the International commercial flight operations from 27th March 2022.

As we already know the International flights were suspended until 26th of March 2022. The civil aviation regulator had extended the prevailing ban on International commercial flights until “further orders.”

On March 23, 2020, India had banned International flight operations as a strict measure to control and contain the spread of the corona virus. Later In 2021, the government had announced plans for resuming the international flights from December 15, 2021. This was later put off as there was the emergence of the third covid-19 wave all around the world.