Do You Know These Airports of the USA with Most Runways? 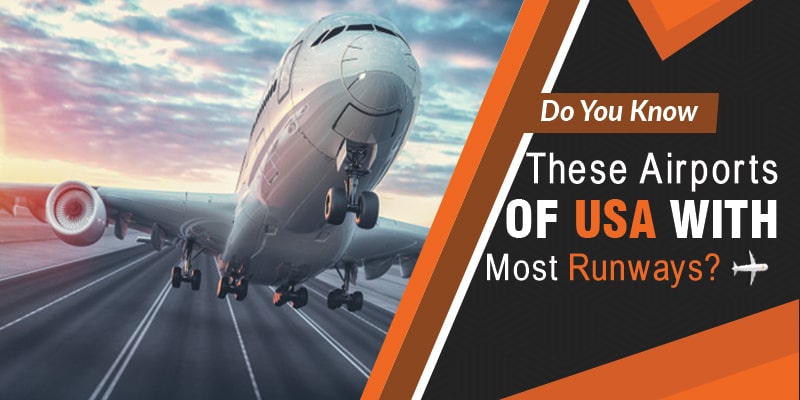 The airports with the most runways are listed in the table:

It is the primary airport in Atlanta that is situated over 4,700 acres. It consists of 192 gates in which 152 are domestic and 40 are international. It is one of the busiest airports of the world holding 104 million passengers. There are a total of 5 runways at the airport.

This airport has implemented several new capabilities over the years such as Automatic Dependent Surveillance-Broadcast (ADS-B) Out, Cockpit Display of Traffic Information (CDTI), and Terminal Sequencing and Spacing (TSAS) in the terminal area. These capabilities are geared towards improving the ability of controllers to deliver aircraft to the runway with the desired separation from the preceding aircraft. An optimal average spacing between arrivals as well as arrival capacity boost can be achieved.

Spread across 7200 acres, this is a major commercial airport on the southwest side of Chicago. Today it is the second largest airport in the Chicago metropolitan area. It has a total of 5 runways that have shorter distances available for landings than for takeoffs. Runway 9R/27L Ext with the length of 11,260 ft is scheduled to open in 2021 for commercial purposes.

This airport, spread across 2386 acres, is located 8 km south of downtown Milwaukee in the US. It is a civil-military airport with 38 gates in the terminal. It also has a total of 5 runways. With approximately 9 airlines serving this airport, it witnesses around 135 departures per day with non-stop flights to 35+ destinations in North America.

The Detroit International airport is located in Romulus, Michigan that covers around 4,850 acres of area. It is the main gateway for tourism in metropolitan Detroit. Here are a total 6 runways in this airport.

It is also known as General Edward Lawrence Logan International Airport situated over 2,384 acres. Around 38.4 million passengers are served per annum. At this airport there are a total 6 runways.

Denver International Airport is located in the Western US served over 33,531 acres area.It holds a total 6 runways in which the 16R/34L of 16,000 feet length is the longest public use runway in North America and the seventh longest in the world.

It is the primary airport in the Dallas Fort Worth metropolitan area. This airport is the ninth busiest international gateway in the United States. It has a total of 8 runways.

1. Which US airport has the most runways?

2. Which US airport has the most international flights?

The O’Hare International Airport is known for its maximum number of runways, which is slated 8 as of now.