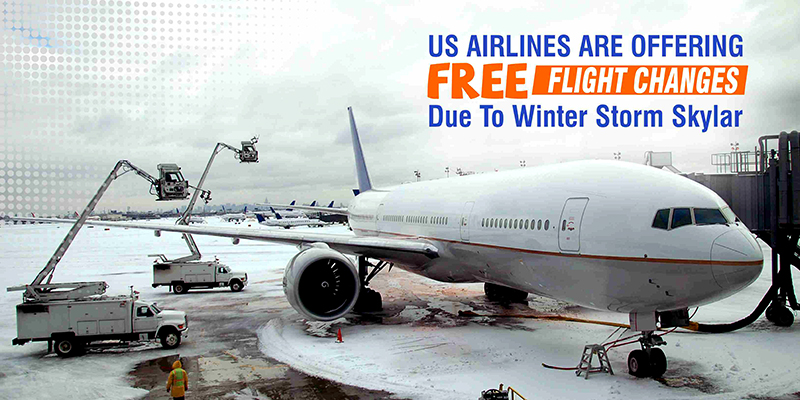 Thousands of flights are being affected by the Nor’easter which is wreaking havoc on travel plans once again. There are cancellations and delays seen because of the Winter Storm Skylar.

Due to the heavy snow and blizzard conditions throughout the Northeast, a number of airlines are impacted by Skylar, resulting in canceled flights Monday night and Tuesday.

Around 1,700 flights had been canceled in the US alone by early Tuesday morning according to the statistics of FlightAware (a website that tracks flight cancellations).  As a result, airlines are offering waivers to reschedule or get a full refund for their flights to those impacted by Winter Storm Skylar.

Talking about the conditions, some areas are still covered in 8 inches to a foot of snow. And as per the National Weather Service, parts of New York State saw 7 inches come down in 2 hours.

Here are the details of the airlines that have announced flight cancellations and fee waivers for customers:

Delta Air Lines canceled around 300 flights before the storm hit. Hence the airline offered a “winter weather waiver” to affected passengers. The customers need to reschedule their flights by March 17.

Talking about American Airlines, the company is allowing customers with flights scheduled on 13th and 14th March to rebook their trips with no extra fee.

The passenger of United Airlines can rebook flights originally scheduled to depart on 13th and 14th March by March 17 to avoid any additional fees, according to the company.

JetBlue canceled around 400 flights and the carrier offers March 15 for rescheduling help and refunds to impacted customers.

Customers traveling through Alaska Airlines can change or cancel their flights with no fee on or before Wednesday, March 21.