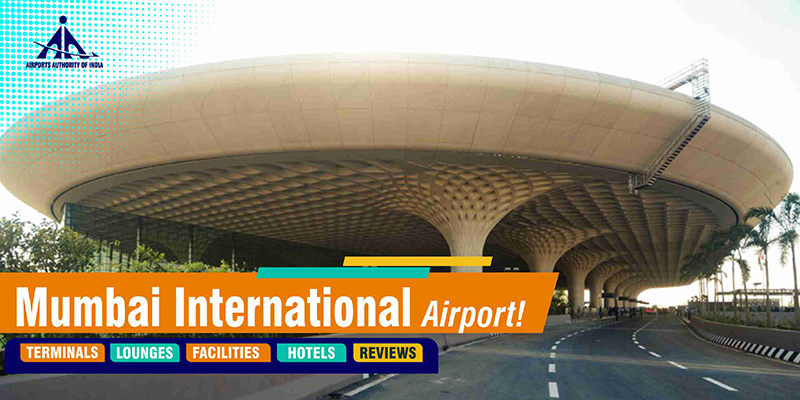 When it comes to international passenger traffic, Mumbai holds a very good record. The airport ranks at the 14th position when it comes to knowing the busiest airport in Asia.

The airport serves over 44.68 million passengers in 2016. For the session 2016-17, the passenger traffic at the airport crossed 45 million. The airport is also the 2nd busiest in terms of cargo traffic.

The terminal 1 at the airport is specifically used for arrival and departure of domestic passengers. Initially, the building was used for domestic as well international operations. Afterwards, the airport was refurbished several times over the decades. It supports the major airlines like SpiceJet, GoAir, and IndiGo and has 11 passenger boarding bridges in total. Mumbai International Airport Limited renamed the T1B to T1 in the year 2017. It was done to help the fliers identify it easily.

The terminal 2 at the airport covers more than 210,000 square meters of area. This terminal replaces the previous demolished International Terminal. It is an X-shaped terminal which has around 450,000 square meters of the area across four floors. To support domestic and international passengers, the terminal includes new taxiways which are designed to cater 40 million passengers annually.

Passengers can easily enjoy the services of luxurious lounges at the terminal along with the availability of library, numerous fine-dining options, and a business center. Other stuff that you can enjoy here includes smoking zone, Food and Beverage, bar, luxury spa, shower area and a relaxation area. It also won ‘World’s Leading Airport Lounge – First Class 2015’ title in the year 2015.

Passengers looking for Mumbai Airport hotel must be aware of the following options:

Following are the details of lounges in Mumbai Airport area:

Art at the Airport:

There is culturally-rich artworks display throughout the airport. Passengers can easily get the glimpse of that.

You can find the ATMs in T1 Departures and Arrivals areas of the airport. You can easily go there and get the cash as required.

For the enjoyment of the kids, there is a colorful jungle-themed indoor playground available at the airport. Children ages from 2 to 12 years can easily grab these services. This is located at T2, airside, Level 3 and is open 24 hours.

Passengers are advised to carry the currency of the country in which they are traveling. Anyhow, if you don’t do so, there is the availability of currency exchange at the Mumbai Airport.

For all the shopping lovers, there is the availability of duty-free shopping. You can avail this at the Terminal 2 at both Mumbai airport international departures as well as Arrivals sections. Here you will find numerous kinds of stuff and a wide variety of retail shops throughout the terminals.

There are a number of food options available for the passengers throughout the airport. These options are open 24 hours a day:

At the Mumbai Airport, passengers can easily get the luggage locker facility. You can avail this facility at all the terminals with the storage period of up to 90 days. This facility lets you store your luggage in the Domestic terminal and can also retrieve it over in International or vice versa just by paying a certain fee per bag for up to six hours of storage.

At the airport, you can also avail the emergency medical care facilities. This is available 24 hours a day in the airport’s Medical Inspection rooms.

The locations of the medical facilities are as follow:

Remove your tiredness at the airport by getting the extensive services of at Heaven on Earth Spa. You can get the foot reflexology as well as full body treatments. The location of the same is at all terminals including 1B, 1C, T2 Domestic, International Arrivals and International Departures.

In case, you are new at the airport; you can grab the bus service at the airport easily. There are private buses whose information can be taken from the Information Desks located in the Arrivals areas of each terminal.

You can also find the licensed taxi or a prepaid taxi service at the airport to reach your destination from the airport.

You can pick from the three different railway lines that reach to almost all parts of the city and the suburbs i.e. Western Line, the Central Main Line, and the Harbour Line. Just through a taxi or auto-rickshaw or bus, you reach other parts of the country easily.

Just magnificent. Very quick, very safe, incredibly clean and a brilliant piece of art. The security check is right at the entrance, but that just makes the airport safer. The duty-free and eating options are diverse and value for money. Housing a huge art wall and boasting of nice airside views, you can never really get bored of waiting for your flight.

Having holidayed in Goa for over 20 years I have seen many changes to the airports. This is one of the better ones. When we visited at the beginning of March the building had only been opened for 15 days so yes there were teething troubles. Just make sure you use plenty of protection. As far as security is concerned I don’t care how many times I am checked at least I know I am safe. Better that than poor security.

Stunning terminal. Flew in and out in May 2014 and just arrived on June 20th. Have traveled extensively all over US Canada and Europe. Just finished a million flown miles on United and have flown into most Western airports numerous times. It is a bit of a hassle and that is why they are building the domestic pier. Overall great experience. Will continue to use this airport and enjoy the artwork.