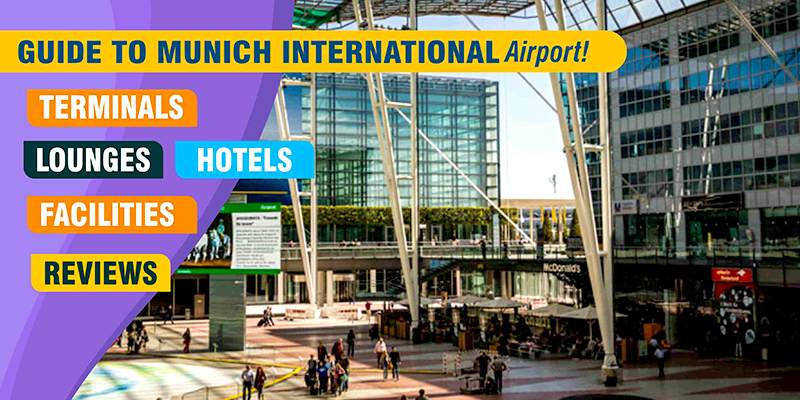 Named in memory of the former Bavarian Prime Minister Franz Josef Strauss, the airport is located 28.5 km northeast of Munich near the old city of Freising. It has two passenger terminals and two runways as well as extensive cargo and maintenance facilities.

The land area covered by Munich International Airport is 15.75 square kilometers. The major facilities of the airport are located in the area between two runways. Munich airport consists of two terminals, which are terminal 1 and terminal 2.

The older terminal is the terminal 1 which commenced its operations on the opening of the airport on 17th May 1992. Having a total capacity of 25 million passengers per year, the terminal is subdivided into as A, B, C, D, & E as five modules. All the facilities related to departures and arrivals are handled by modules A and D. Modules like E is provided to handle arrivals only.

The commencement of operation of Terminal 2 was on 29 June 2003. Having a Design capacity of 25 million passengers per year, it is used by Lufthansa and all other Star Alliance members helping Munich except Turkish Airlines. Having a design of a hub terminal, it has not been divided into modules as terminal 1.

The arrangement of all the facilities is gathered around the central plaza. Unlike other terminals at different airports, it does not have a separate area for departing and arrival of passengers. On 15 January 2009, a new level 6 was opened.

Terminal 2 has an additional bus gate on lower level 03 and two main departure levels at level 4 and 5. Level 5 gates are dedicated non-Schengen gates. The Schengen gates are located at level 4.

The Munich airport Center, sometimes also known as MAC is an area that connects the two terminals and has a shopping, business, and recreation areas. Earlier, the older Central area was built as part of terminal 1, is now hosting a shopping mall and the S-Bahn station. The new MAC, which is built as a part of terminal 2 has a large outdoor area with a partly transparent tent-like roof.

The entire state of Bavaria only has one supermarket which is in the Munich airport center which is opened from 5:30 a.m. to midnight every day, including Sundays.

If you are traveling in the economy, you can enter in one of these lounges at the Munich Airport by paying at the door, by a lounge pass or through a lounge membership program

It is located at terminal 1; on level 3 near departures C. Showers are also available. One can enter by paying at door, or by a lounge pass or through Lounge membership programs.

It is located at Terminal 1, airside at level 5 near the Schengen area. One can enter by paying at the door or by a lounge pass or through Lounge membership programs.

Located at terminal 2 satellite at airside, after passport control on level 4 which is opposite of gate k11. One can enter by paying at the door or by a lounge pass or through Lounge membership programs.

Located at terminal 2 satellite at airside, after passport control on level 4 which is opposite of gate k11. One can enter by paying at the door or by a lounge pass or through Lounge membership programs.

There are many airport options inside and around the airport if you do not like sleeping at airports.

These are self-service pods with full bed, A/c, private blinds and internet access. Available in Terminal 2 on level 4 and level 5, nap cabs can be booked as well as purchased on site with the help of a credit card.

It is located between terminals 1 and 2. The distance is just a short walk from the baggage claim to the hotel.

Located 5 minutes away from the airport, the hotel is not having a shuttle service. The guests can avail a bus service to reach the hotel.

Also located 5-6 minutes from the airport, a shuttle bus is provided at the airport for each way. The shuttle is available from 4:30 a.m. to 11:00 a.m. and departs every 30 minutes.

Located at a distance of 6 minutes away from the airport, the shuttle runs at two-time schedules every half an hour.

The hotel is located 4 minutes away from the airport and an airport shuttle service is available each way.

You can park free for 10 minutes in the stopping zones at terminal 1 A-D and Arrivals E and at Terminal 2. If you are exceeding a free 10-minute, the parking rates will be charged as applicable. For longer periods at Munich airport parking, one can park at near the terminals P1-P4, P7, P8, and P20.

Munich airport Wi-Fi is free of cost, by connecting to the “Telekom” network. You will receive an email for confirmation after registering with your name and email address. It is important to keep this email as it contains a link to change or cancel your connection.

Internet Kiosks are also available at the airport, which is coin-operated and have printing capabilities as well if one doesn’t have a mobile device.

There is a service of doing some sightseeing if you have long layover hours. You can do that with the proper documentation and you can leave the airport and do some sightseeing.

The bus system is well connected to the airport. There is always going to be a bus you if you want to travel to the city center or even a long distance coach.

The car rental agencies are operating on site in areas B and C in the central area between the two terminals.

As a courtesy to their guests, many local hotels are providing the shuttle service.

Limousine and various transfer services are provided by many private companies. It is a luxurious and private mode of transportation.

Various types of taxis are available outside the airport according to passengers needs from sedan to 8 passengers seating minibusses. The passengers can also choose from smoking or non-smoking vehicles.

Running at an interval of 10 minutes, Two S-Bahn train lines are operating between the airport and the city center.

The world’s first airport brewery is located at Munich airport. Seven different kinds of beer are available here. It is located in MAC Forum on level 3 at the landside. It opens at 8:00 a.m. and closes at 1:00 a.m.

After passing through the security screening and leaving the public area, terminal 1 and terminal 2 aprons are covered in the 12 km route passing two fire stations and the runways. Airport Tours are available and managed in German at 11:30 AM, 1:30 PM, 3:30 PM (Sat & Sun) and 1:30 PM (Mon – Fri).

On the landside in the MAC south, level 3, 24 hours ATMs are available.

In terminal 1, level 3 next to the service center and at T2 at the airside, baby care facilities are available.

The baggage trolleys are available throughout the airport. The arriving can use it for free.

Brants barber shop is available in terminal 2 at airside beside departure level 4.

If you are feeling lucky, there are video slots and entertainment available at the casinos located in both the terminals. But both the Casino’s are located before the security.

There are many things to do for kids at the airport. Lufthansa has provided kinderland, which has aviation-themed climbing and sliding facilities, an arts and crafts corner and children’s cinema. Trained child care specialists take care of the children area.

Entrance to the kinderland and play zone is free for Lufthansa members and the children of the first class.

The airport has a supply of 50 cots in case of the bad weather or massive flight cancellations for standard travelers. One can easily ask an employee in the airport about the location of the cots. The cots are not available to the passengers who are just spending the night at the airport.

Currency exchange is offered at two locations. The 1st one is in the MAC forum on level 3 at landside and the 2nd one is in the terminal 2 on level 4 departures at Landside nearby gate G.

At the Munich airport medical center, various preventative and emergency medical services are available. It is located on level 3 of terminal 1. You have to visit specialized medical clinics in the Municipal Airport Centre if you need to see a specialist.

There are various outlets located in the terminal for mobile charging.

There are various praying areas available at the airport for Christian, Muslim and various other interfaith for 24 hours.

This airport is beautiful! Shopping is great for those disposed to do so. Connectivity is SO MUCH awesome than ANY U.S. airport I’ve visited. I just need to find an appropriate sleeping lounge on the 8+ hour layover. The most important thing, the restrooms are clean and shiny. Thanks, I’ll be back.

I had a Great experience during my flight layover. Had such an amazing time at the hotel and the service provided by the airport is A-one. I’ll always choose this airport from now on.